Santa Clara is the capital city of the province of Villa Clara, so it is determined as a wide platform to go to anywhere in Cuba. This city was founded in 1689 by distinct families who are remembered by a monument built with columns placed on the church of Carmen square.

To reach to Santa Clara, you can ride a train, airplane or buses. When you arrive to your destination you have to move on from the terminal or airport to the center of the city, using local taxis that are horse-drawn carriages who have seats placed on each side, those taxis normally charge 2 pesos. But you can also find common taxis, however, they charge a bit more.
The historic center is too small, so the tour from the central square to the boulevard is nearby. About three blocks from the central square you can find a hostel called Hostel Las Arecas, although it is said that it’s a house in all words, it offers a variety of rooms with air, big bed, and bathroom for only 25 CUC a night. The Hostel is located at San Miguel street which is almost reaching the boulevard. The owners offer a good service and a nice cordiality

What tourist places are offered by Santa Clara?
Once you are stayed at Hostel Las Arecas, you can walk a little to the historic center, there you can find the Divina Pastora church and the church of Carmen park, both are located nearly to the center of the city, also nearly is located the memorial of the guerrilla Ernesto Che Guevara.

This museum is small, however, you can visualize the diversity of the pictures who talk about the life of Che, also some objects who he used in the revolution.
Near the museum are places where people can go and taste typical food and drinks of the place before continuing the tour to the city; such as the assault of the armored train which is an emblem of the Battle of Santa Clara, it is located in the park who has the same name, the entrance is paid to look the wagons without the need of enter to the park.
This park is located east of the city; itself is a train that was assaulted in full battle when they took the city, almost 10 minutes away from the train you can find another bronze statue of Che who carries a child.

The entry to the museum and to the mausoleum of Che is completely free, but to the armored train you have to pay to can enjoy the exhibition. 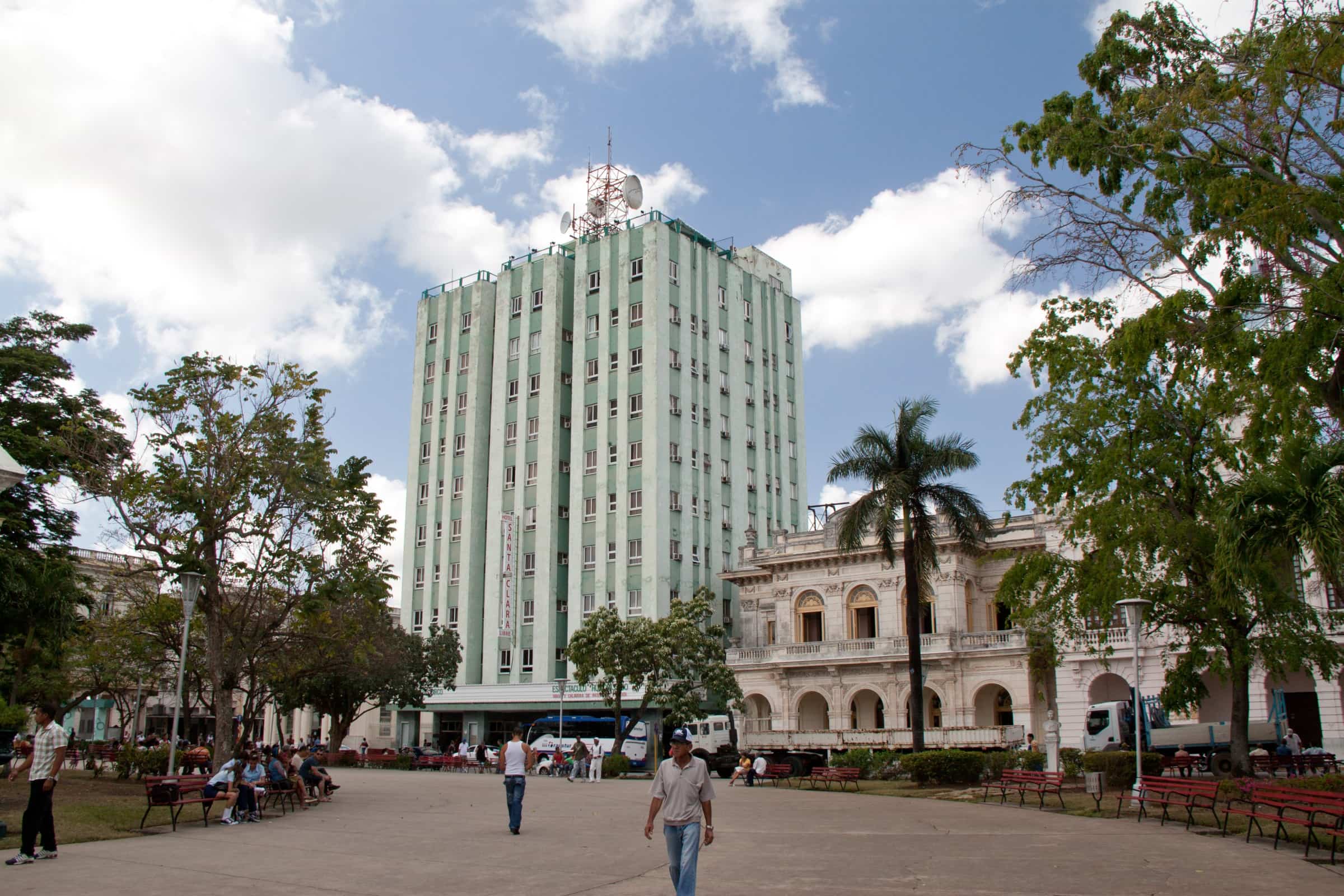 In Santa Clara you can find various options where to eat for a low price. Next to the Hostel Las Arecas you can appreciate the Cuban coffee shop, there you can taste some snacks of tortilla with cheese for 2,5 CUC and even Hamburgers for 5 CUC.

A few steps away we have the Chocolate Corner (“Rincón del Chocolate”), this coffee shop is more sophisticated, it has even an air conditioner, there you can taste of an exquisite Italian coffee, bonbons and tarts.

But if you want to taste a delicious street pizza, then the right place is Lorda, located between the park and the boulevard, the pizzas have a cost of 10 pesos and they are so good.
Another nice place is the pizzeria restaurant La Toscana where they prepare local and foreign food and their cost is higher. However, you can ask for the restaurant menu of the local food who is less expensive.

If you want to connect to internet, you can do it with the public WI-FI of ETECSA which signal can be enjoyed in Remedios and Leoncio Vidal parks. However, if you want to get a 30 minutes’ card or an hour of internet, you have to go to the ETECSA store located on the Marta Abreu street.

When you are walking the boulevard you can appreciate, by the commercial Street, the restaurants, stores, the Cuban supermarkets and coffees. These types of pedestrian streets of Cuba are normally very lively.

In the Leoncio Vidal park located in the center of the city, we can found several emblematic buildings such as the Theater of Charity, The Jose Marti public library or the Central Hotel.
If you keep through the tour you can enjoy the monument of the Divina Pastora church, which is the most relevant of the city, so much so always has its surroundings fully of people both Cubans and tourists, and this is caused because the street has music, kiosk with beer sales and street foods everywhere, and even more if it’s a holiday like the carnival.

Once you finish your tour with the big revolutionary monuments of this emblematic city of Santa Clara, it’s a good idea to taste the delicious ice creams from the very known ice cream shop La Coppelia, it’s a local very wide with tables very comfortable where you can taste its ice creams, calmly, whether talking or see the moves that are made outside of the ice cream shop.
So you can’t go back from this emblematic city without having tasted the delights from La Coppelia, located one block from the park, just down the Colon street.

Consequently, if you are thinking to visit Cuba, you can’t miss the chance of walking through Santa Clara the emblematic city of Che Guevara. Know his history and experiences during his revolutionary battle.
Every corner of this city hides a memory of a past Cuba, with evidence reflected in every block, however, you can appreciate a very nice environment, for the cordiality of people